The maple in Japanese culture

Let us travel back in time to the 9th century, an era when Britain experienced a great influx of Viking peoples, the Maya Classical Era in South America began to decline, and the Frankish Carolingian Empire reached its height.

Maple Tree, by Sakai Hoitsu, Nomura Art Museum, Kyoto
In Japan, the 59th Emperor of Japan, Emperor Uda (866 – 931) abdicates and visits Mount Ogura in Yamashiro Province. When he sees the beauty of the maples in their autumn colours on the mountain, he is so greatly impressed that he orders the Imperial Regent, Fujiwara no Tadahira (880 - 949) to encourage Uda's son and heir, Emperor Daigo, to visit the same area.

​This is thought to have inspired Fujiwara to pen the following poem:

​The maples of Mount Ogura / If they could understand / Would keep their brilliant leaves / until the Ruler of this land / Pass with his Royal band. 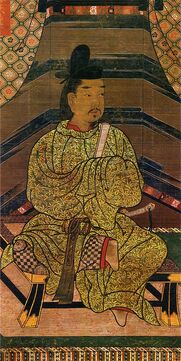 Portrait of the Emperor Daigo, from the collection at the Sanbō-in of the Daigo-ji Temple in Kyoto
The Japanese maple has been a source of inspiration to travelers throughout history up until this very day. Foreign tourists flock to Japan in fall to enjoy the view of the autumn foliage, to which the Japanese maple (Momiji in Japanese) lends a colourful accent. References to the Momiji are found in Japan's oldest poetry collection, the Man'yōshū, literally "Collection of Ten Thousand Leaves".

The other word for maple in Japanese, Kaede, stems from the fact that the shape of its leaves resembles a frog's (kaeru) hand (te). Although the Japanese see the momiji as native, and the kaede as foreign, the kaede, too, has a presence in Japanese culture since ancient days. In the Man'yōshū, for example, there is a poem in which the court lady Otomo Tamura speaks about her longing for her lover, and how there is no time that she miss him more, than when she sees the fallen leaves from the kaede in her garden.

The Maple Laboratory develops products based on the momiji and the kaede, based on the unique features and characteristics of these species. The momiji has a long history in Japan as a medical cure. It's image fits well into the world of the Japanese cuisine. It's a culture that has taken the world by storm: "The 2010s was the decade when Japanese food took over the world," Patrick St. Michel wrote in the Japan Times. "Japanese cuisine in the 2010s has enjoyed a period of popularity, more so than any other cultural export to come out of the island in recent memory."

Now is the time for foreigners to discover what Japanese and other maple species can offer the health conscious and aesthetically sensitive consumer of food and drinks. Our mission is to research the application and ingredients of Japanese (momiji) and foreign maple (kaede) leaves for health and beauty. We develop products such as maple tea, maple extract, and maple cider with an emphasis on the momiji.

The maple in Japan and the world

"What is the difference, then, between momiji and kaede?" we are often asked. Momiji and kaede belong to the same family, so from a taxonomic point of view, the momiji (Japanese maple) is a sub-group of species in the kaede (maple) family. In Japan, maples recognized as momiji are the Iroha momiji (Acer palmatum), the Ōmomiji (Acer amoenum), and the Yamamomiji (Acer matumurae). Although the shapes of their leaves are similar, Acer japonicum, Acer shirasawanum, and Acer sieboldianum are taxonomically classified as palmata Sect. (kaede, i.e. non-Japanese maples) in Japan. In other words, the Japanese don't make a distinction between the "momiji" and "kaede" based on the shapes of their leaves.
Benefits Overview